There is much to recommend an older home. Our 1870’s New England frame house’s period features – the tin ceiling, the copper doorknobs, the wide pine floors – charmed us when we purchased it in 1986. But come summertime, the risks of an old home may outweigh the rewards. Once per year (and one desperate year, many many more times) I will conclude my only option is to sell, and sell fast.
A nice summer night, the windows opened to the cool air and the ceiling fan granting a gentle breeze with its rhythmic whir. We read our books in companionable silence. Out of the corner of his eye, my husband views a passing shadow. Before he can articulate his suspicion, our fears are confirmed – another bat is upon us with that familiar yet still alarming elliptical flight pattern. Nothing raises your heart rate like a indoor bat. Brian to his credit and with years of practice, subdued the creature in under a minute. We keep a badminton racquet, which by the way, is superior to the heavier, shorter-handled tennis racquet, close at hand and B fearlessly stunned the interloper in one swing. We then trapped the bat under a mixing bowl, weighted down with a stack of yearbooks of various vintage. Then, you may slide a thin cookie sheet under the bowl, remove the books and you are ready to lift the bowl and toss it outside. This maneuver invariably awakens the beast from its slumber and there is an excited flapping and squealing to accompany the journey. Once outside, the bat might fly free. But, alas – trigger warning – some small, flying mammals may perish in this essay. 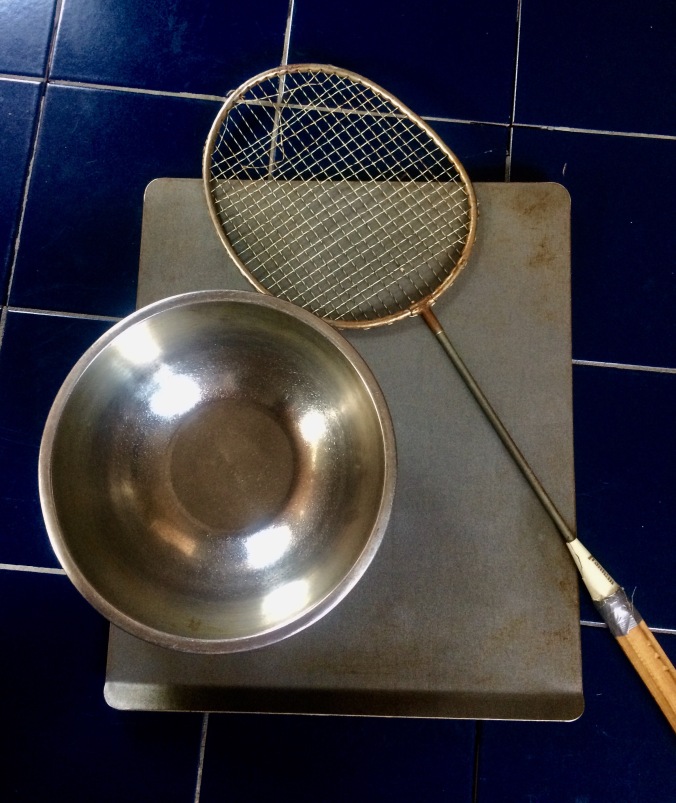 The only tools you need

We have had an indoor bat most every year. And while I have not grown accustomed to it, I have gained a manner of respect, if not admiration, for this species. While not quite my spirit animal, I understand that they play an important role in the ecosystem, that they eat bugs and are sadly endangered by “white nose syndrome” (apparently, not in my neighborhood). I kept a couple of totems (a bat beanie baby and a rubber bat) at my desk at work. And one must admit that vampires are sexy in their numerous literary and on screen adaptations.

Early in our residency here, I called the state animal control department and the “bat expert” provided me this compassionate, yet unactionable advice when I asked how to deal with the problem: “They want to live in harmony.” Here are is a battery (see what I did there?) of examples of the harmony under which we live.

1. The First One. Our first bat appeared during a visit from my father. We were, no doubt, watching the Red Sox at the time. We chased it around with blankets and flashlights for a good half hour. Gave up and went to bed. The next morning, we spent a solid hour searching for our little friend. Tucked among the folds in the living room curtains, we got our first view of what a resting bat looks like. So compact, so amorphous, so harmless.

2. The Battic. We renovated our attic one year. In this dark, dusty space where the cobwebs competed with what we didn’t know was guano, we envisioned a light-filled atelier. Alas, we disturbed the nest of a large bat family. Now having no way to exit the house, when they awoke hungry in spring, they had no choice but to come downstairs. We had 12 in 20 days. It is here where Brian perfected his swing, after a broad range of experimental efforts including the use of the vacuum cleaner. (It is also here when I called the bat expert.)

3. Through a Child’s Eyes. As a “latchkey” elementary school kid, my son came home to what he described to us as “a turtle stuck to the side of the couch.” So compact, so amorphous, so harmless.

4. My Only Capture. Near the end of the attic renovation/bat invasion, while standing in the kitchen, I felt a gentle weight on my shoulder. Clearly weakened by hunger (the bat, but perhaps me as well) it provided no resistance as I brushed it to the ground and scooped it up in a plastic bag, not unlike the technique I used to pick up after the dog.

5. The Confrontation. In what was likely the cat’s best day and the bat’s worst, our son called us downstairs one night to witness the cat taunting and toying with a very distressed bat.

6. A Bedtime Interrupted. Laying awake in bed one night, I felt or perhaps heard a barely perceptible displacement of air above me. I nudged my sleeping husband and asked if he felt like a quick game of badminton.

7. A Sleepover. My son and his friend decided to sleep in the attic. This friend whom I previously considered the most brave and confident of 10-year olds, experienced his first bat encounter and would stop screaming and would not come out from under the blankets even to move to a safer room, even after the interloper was long vanquished.

8. Ain’t no party like a bat party. Our then college-aged daughter took advantage of our absence one summer to host a soirée. While establishing the beer pong court in the attic, an uninvited guest was discovered. Not sure how the bat was removed, but the next party had a main floor beer pong table (not that that is a guarantee of safety as we had bats on all four levels of the house.)

So, living harmoniously is working out well. We get by, thanks to Brian’s able efforts at capture and a certain trust these small beasts mean no harm. And as hard as it is to see summer fade, I know that cold weather will send the bats into hibernation and I can spend another year in this old house.

One thought on “Batting Average”