Not to be outdone by my recent milestone birthday, our Lo turns two today. When one doubles one’s age in a year, one could be accused of showing off. You can’t really blame her in that there is not another year in a child’s life that demonstrates as many changes. Every time we see her, Lo exhibits new achievements in physical skills, in language, in revealing her personality.

Therefore, as I documented a year ago, in no particular order, here are ten current marvels about my favorite two year old.

1. When you ask her how old she is, she proclaims “Two!”and holds up one finger.

2. She remains very fashionable and can now accessorize on her own. She might wear a dish towel as a scarf. On a recent Wednesday, she improved the pedestrian outfit I chose (white leggings and a flowered top) by adding a tutu. And a winter hat. And a backpack adorned with a bunny. Now she was ready for anything. 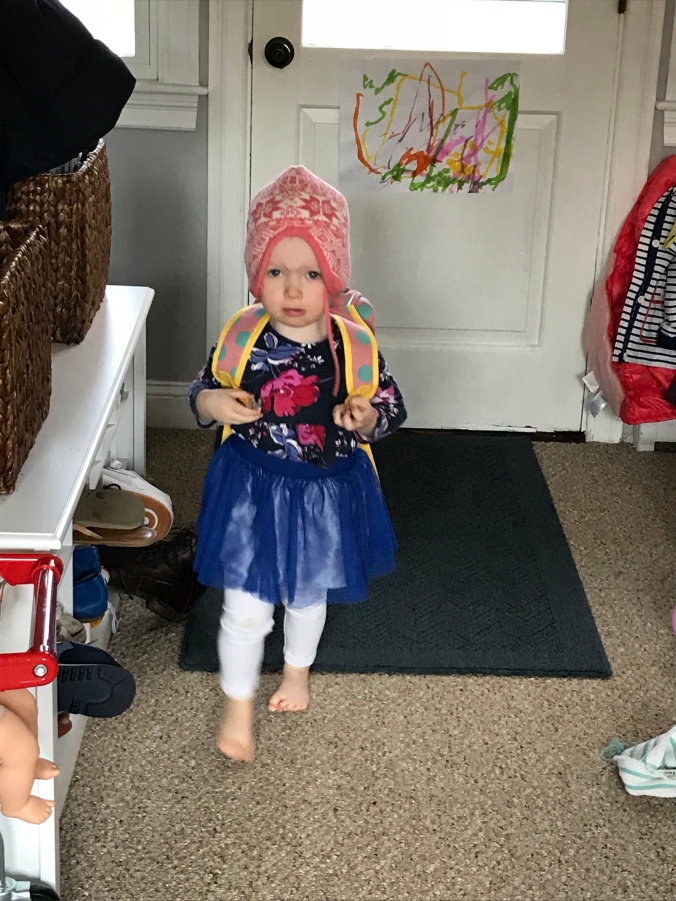 Lo has mastered the runway walk.  And pout.

3. She has clear favorites when it comes to toys. She loves her baby doll. She loves balls. She also loves her tiny Daniel Tiger characters and much time can be spent hunting them down while she calls out their names.

4. Although she is very tall for her age, pushing the limits on size 3T, she continues to look like a baby on account of her chubby cheeks and limited hair. 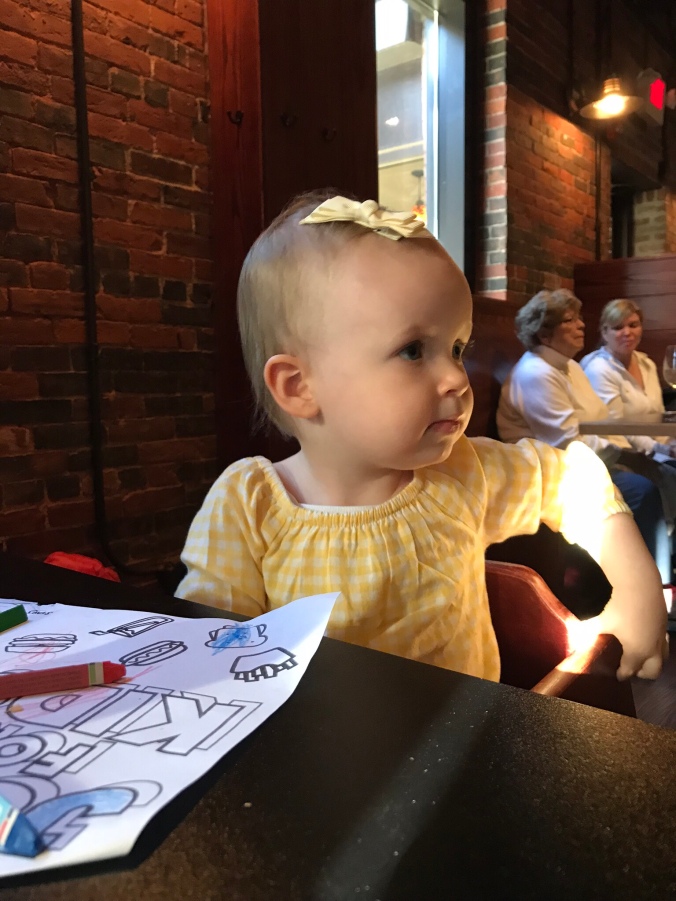 5. Her imagination is evident. Lots of early toddler play is imitative such as pretend cooking or pretend talking on the phone. Lo has advanced to pretending to be something other than herself such as a dog (you have to scratch her head and feed her a snack from the palm of your hand) or my favorite – pretending to be a baby. This involves her laying on floor covered in a blanket. She then pretend cries and I pretend comfort her. She pretend to wake up and then starts all over again. 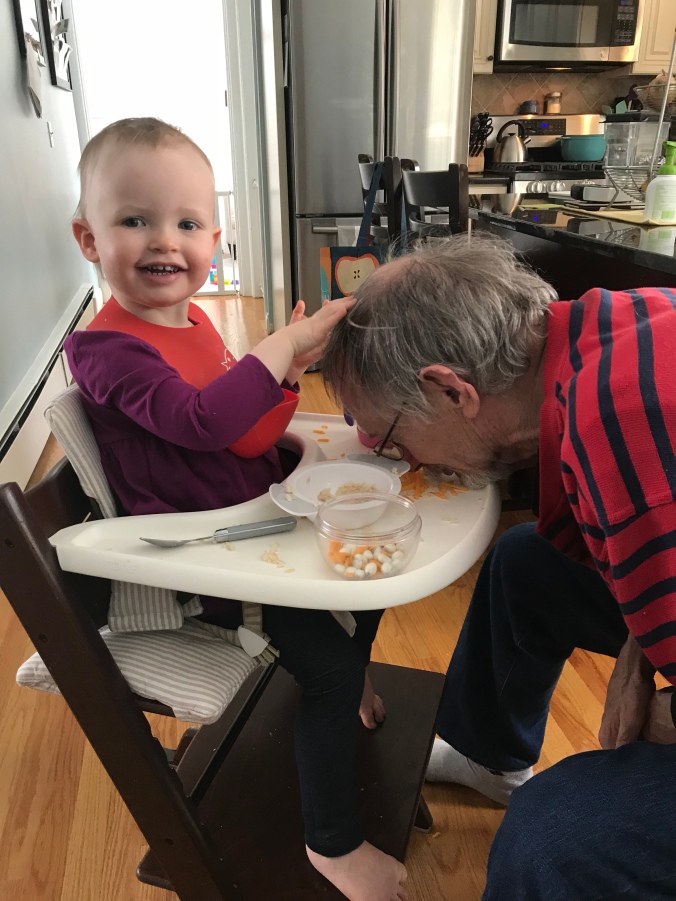 Sometimes Papa also pretends to be a dog.

6. She wants her people around her and catalogs her inner circle several times per day. On the days we watch her, she wants Papa to be in the chair she expects him to be, and will wait outside the bathroom door for him. When she isn’t pretend calling Mama, Dada, Sally and Mimi on an imaginary cell phone or a toy car substituting for a cell phone, she is inquiring about their whereabouts. Dada? At work. Mama? At work. She recently charmingly referred to her aunt as “my Sally” which pretty much describes her relationships with all of us.

7. She uses “bye” is a dismissive way. When she wants to be left alone, she repeats a sarcastic “bye!” with increasing urgency and annoyance. 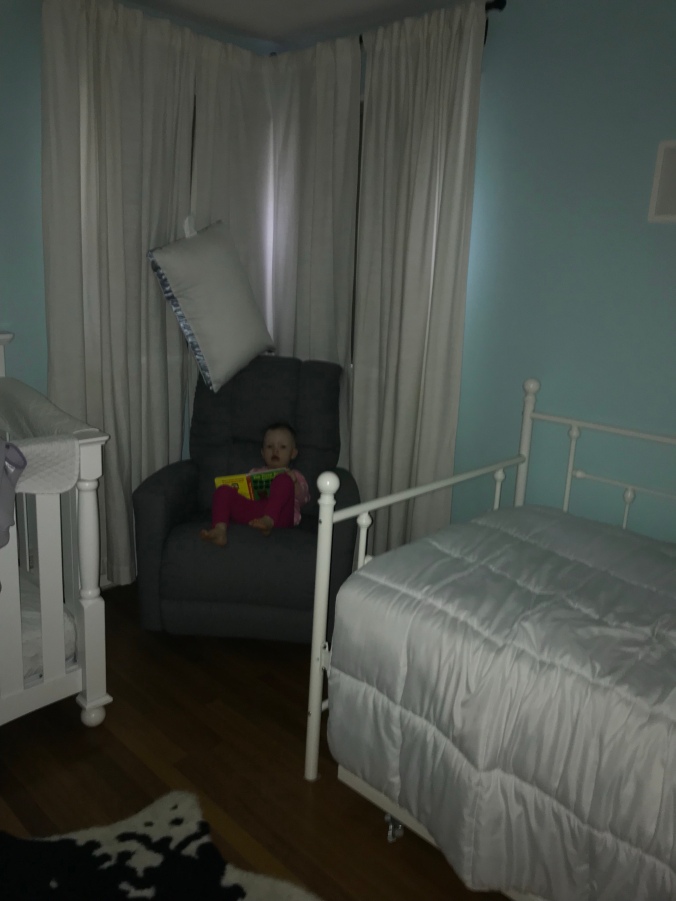 Lo says “bye” when she wants to read alone in her room.  In the dark.

8. Lo is very sociable with unrestrained interest in children, dogs and people at nearby tables in restaurants. She will earn their attention with her greetings and smiles. Last week, she entertained a table of diners by picking her nose when she realized it would make them laugh. Despite her parents’ protests, she even tried a dual nostril maneuver to much acclaim.

9. Her vocabulary is growing each day. Including this adorable complete sentence: More tickle please.

10. She revels in her physical prowess. A mere year ago, she was not walking. Now she runs and climbs. And her walking skills have advanced to the point that she is a master of a variety of silly walks: a high step with one foot, following by the dragging the remaining leg. A short shuffle. Backwards. Sidestep. Walking on her knees. And, dangerously , walking with her eyes shut. 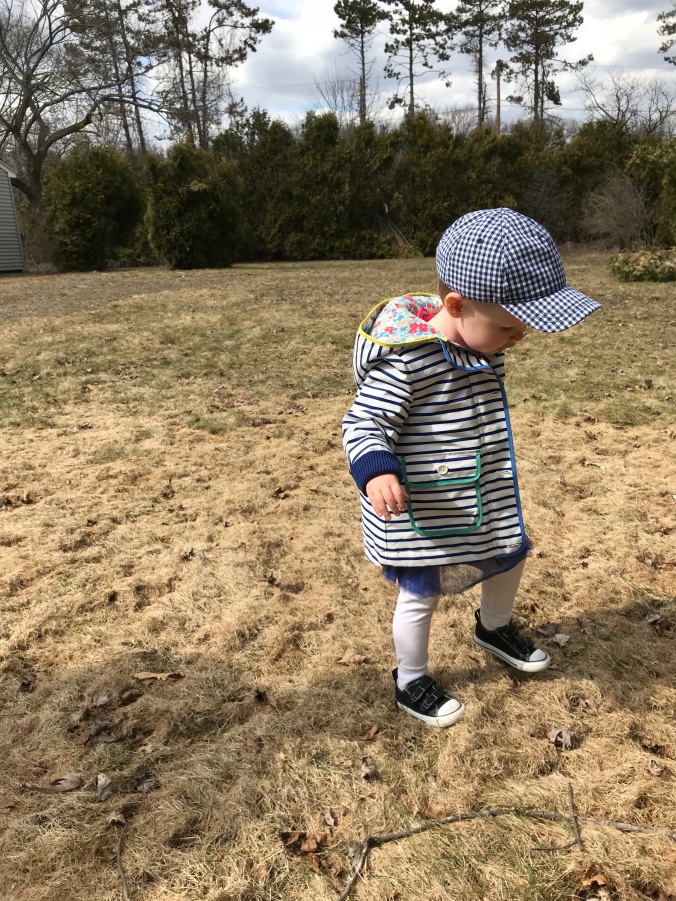 Lo has mastered rough terrain.  And the mixing of patterns.

I am not sure why age two got labeled as terrible. My favorite toddler is happy, hilarious and completely herself. Unfettered by self-consciousness, confident in her abilities and still so irresistibly cuddly, Lo is fabulously two. This Nana wishes you a very happy birthday and thanks you for being my Lo.