As a birthday gift this Second Year of Raisin, I requested and received the Fitbit fitness tracker. I am delighted. I coveted this item, but was too cheap to get one for myself. I have been committed to exercise for a long time. All the cool women at both my gyms wear some sort of device. I worried that I sit too much (you know, “the new smoking” without the odor or secondhand effect) and looked forward to the reminders and “challenges.” Truth be told, I owned an earlier model several years ago and abandoned it. But it had lacked the new features that now beckoned me. So, 4 days in, here is my customer review.

First of all, it is comfortable and attractive enough to go with my entire wardrobe , which is basically workout clothes and clothes that look like workout clothes. Well done, Fitbit. 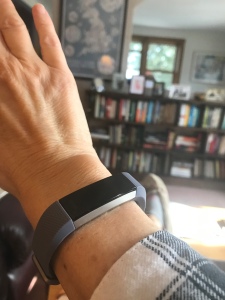 A new feature that I was greatly looking forward to is the heart rate monitor. I am not sure why this is so appealing. Maybe I need validation that I have a pulse. Or, that my heart rate is “Excellent”. In fact, I learned that it is. At least for “women of my age.” But, I don’t understand the graph. Why is my score 41-44 but the graph only goes to 28.4? 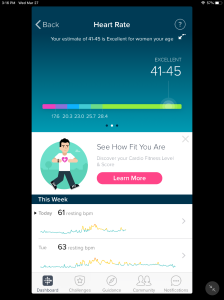 This nifty device constantly monitors what heart rate “zone” I am in. Resting, fat burn (?), cardio and the coveted “peak.” I have worn my new jailer friend to two workouts. One was a hour’s worth of alternating segments of burpee-heavy cardio balanced with with multiple reps of free weights. The other was 50 minutes of cardio by the craziest trainer at the gym where I was sure I was 1) too old for this 2)would pass out, or 3) maybe just pee my pants from all that jumping. Between the two workouts I achieved a total of 1 minute “peak.” I guess I need to try harder.

The other feature, and one I both longed for and feared is the sleep tracker. I have written about my intermittent sleeplessness. I’m not sure if anything that can be done about this (I am looking at you Melatonin, Meditation and Advil PM) but I was curious as to what was really going on. The first night, I was evidently awake for 3 hours (maybe I was too excited). The next, that was down to to 1 hour 33 minutes, although I slept 3 minute less in total. And on night #3, here’s what happened. 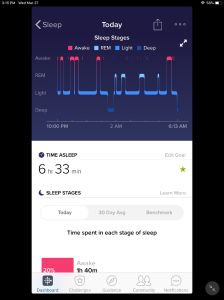 My kingdom for some deep sleep

After spending a fair amount of time awake, around midnight, my sleeping husband dreamt he was being targeted by a rifle-wielding assailant, screamed, tried to scurry out of bed and knocked over the lamp. His nightmares, at least, have matured from being chased by bears, tigers, and burglars. Thus exhausted, I fell into my only period of “deep sleep.” Oddly, the device indicated I awoke at 6:13. I know I was awake at 5:40 because I spent the next 33 minutes feeling resentful that I was up so early on my birthday. I began to suspect the Fitbit could not tell the difference between sleeping and laying quietly in bed, stewing about something.

I got to prove this theory later in the day. Another coveted birthday gift was my annual visit to the spa for a massage and facial. The device analyzed this as a 2 hour 1 minute nap, with intermittent periods of “restlessness” and “awake.” I don’t know if you have ever had a massage, but not only would it be very hard to doze during one, it is often hard not to cry. Spend any hour with someone pummeling your most tender spots while also informing you of 1) an untreated IT Band injury that needs treatment, 2) your cervical vertebrae that is out of place and requires chiropractic intervention and 3) her worries about the amount of “toxins” she has released into your body. Not conducive to dosing.

How about forty winks during that facial? I don’t know if you’ve ever had a facial, but mine seem to involve a fair amount of picking, plucking, sandpaper scrubs and a “rejuvenation serum” that burns like the depth of Hell or, as my esthetician described it, “tingles.” I guarantee you I did not nod off.

But as we know, heart rate and sleep cycles aside, the real reward of fitness tracking is the counting of steps, with the coveted goal of 10,000 per day. Despite a buzz to my wrist to remind me every hour to get out of my chair and my concerted effort to walk more by 1) doing extra housework I would normally avoid, 2) deliberately leaving items upstairs so I have to go fetch them and 3) pacing while talking on the phone and brushing my teeth, I have failed to achieve the Fitbit nirvana and thus earn a merit badge.

However, I am very optimistic. Spring is here which means I can drag my ass around the neighborhood, occasionally walk to my errands and, praise be, hike. And, best of all, having returned to my avocation of babysitting, I am confidant that Cora’s desire to be held and walked, rocked and walked and fed and walked combined with Lo’s favorite game of “Racing” which involves jogging up and down the hall on repeat will soon being me into competitive steps territory. That is, unless my Fitbit thinks I am asleep. 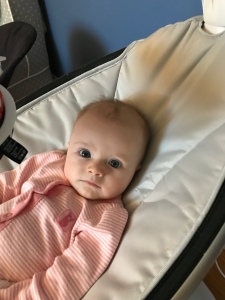 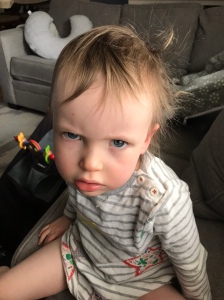